The skin of your newborn is very sensitive; it needs special attention & care from the various bacterial infections. One the infection is called diaper rash which is mostly caused due to multiple reasons which we will discuss here. Sometimes a regular rash can become vulnerable to bacteria, which of course love warm, moist environments like diapers.

In India, people are slowly getting aware of such baby problems but in other developed nations, these problems are given a great importance. No one wants their child to suffer and cry due to diaper rashes & other problems caused by the infections. 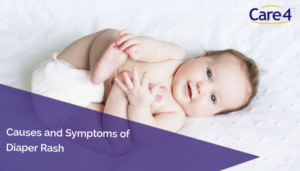 There are a number of things which can eventually cause the diaper rash, as a parent you need to look after your baby carefully.

Here are some main causes which can lead to the diaper rash and other infections:

This is the most common phenomenon that attracts the bacteria and can irritate the soft skin of the baby. Usually, this happens due to leakage of urine from the poor quality of baby diapers. You need to look for leakage-proof anti-rash diapers which are specially designed for the gentle skin of the babies.

Sometimes the sensitive skin of the baby can be allergic to many baby care products, especially the fabric of the disposable and non-disposable diapers. This Allergy can further increase infection, causing the diaper rash.

Sometimes a simple infection may spread throughout the entire region of the surrounding area. Generally, it can be spread around the buttocks, thighs, and genitals. If not cared properly then this area can become perfect breeding grounds for bacteria and fungi due to their moist nature. Try to keep your baby dry and clean.

Antibiotics can have both negative and positive results on the sensitive skin of the baby. Although antibiotics can kill the yeast and bacteria but it can also result in skin infection if used inappropriately.

Those babies who are having sensitive skins such as atopic dermatitis or seborrheic dermatitis (eczema) are likely to have more chances of Diaper rash. Sometimes, the irritated skin of atopic dermatitis and eczema mainly affects areas other than the diaper area.

Let’s discuss the Symptoms of Diaper rashes So that you can appropriate action whenever such problem arises.

We all know diaper rash is generally caused due to hygienic issues. There are a number of solutions available for the treatment of Diaper rash such as the use of anti-rash creams, lotion etc. But the possible permanent solution would be an anti-rash diaper with high absorption leakage protection. Creams and lotions will ease the rashes but it will be a temporary solution until you don’t find a suitable diaper for your baby. Here is the list of top diaper manufacturers in India.